Phan Thanh Tung (An Vinh commune, Ly Son district) said efforts 4 perch capital garlic care home he considered to waste in the garlic this year. Each pole, he just was not up to 100kg harvest garlic, only one-fifth over the same period last year. “Many do not even have to spit garlic (harvest), full waterlogged roots, tubers damaged. Erratic weather, when the sun garlic should rain, the cold to warm and sunny, frost left many dead as the garlic fields, “Mr. Tung said. 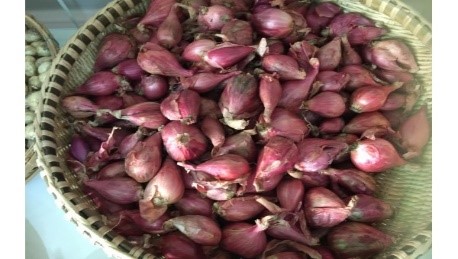 According to many farmers on the island, this is the first year of Ly Son garlic was so heavily damaged. Not only reduced in number, most of the garlic harvest does not guarantee the quality to put on the market.

Per pole garlic, farmers have to invest at least 10 million purchase of seeds, sand, fertilizer and water pumps. With the amount of garlic current harvest, many farmers lost nearly investment costs as well as the effort to fertilize.

Talking to Online by telephone TBKSG, Pham Thi Huong, Deputy Chairman of Ly Son District People’s Committee, said an estimated 70% of the garlic on the island were damaged. If last year, garlic depreciation (20,000-30,000 VND/ kg of fresh garlic), this year, but output is low, not enough to meet the traders but the purchase price is not expected of the growers. 1kg of fresh garlic currently costs 50,000 dong. This price is still nearly equal to the time before 2015 (not less than 50,000 / kg). “The price today is not commensurate with the efforts of farmers. But then the market decides, plus the garlic this year disqualification, traders as an excuse not to raise prices, ‘she said. Crop failure, farmers on the island not only economic damage but also worried about the quality of seed for the next crop.

“In previous years, we will look to the beautiful tubers, intended to do the same. But this situation, do not know where to get good many more varieties. If yes, prices will inevitably lead to “Vo Thi Suong (An Vinh commune, Ly Son district) said.
According to Ly Son District People’s Committee, the whole island has 325 acres of garlic, the average yield previously reached 60 quintals / hectare. In addition to off-shore fishing, many households on the island live on garlic cultivation. Currently, the district has a written submission to the Quang Ngai Provincial People’s Committee to seek solutions to